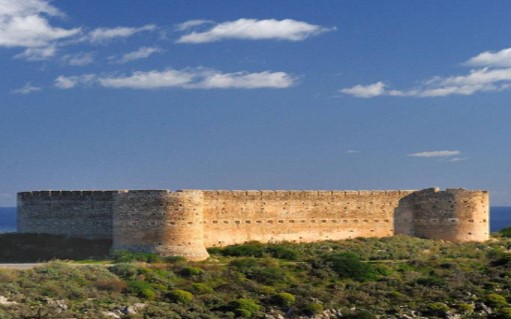 The city of ancient aptera lies on the hill at the west end of Apokoronas towards Chania. This strategically important area overlooking Souda Bay was occupied already by the Minoans 3500-1070 BC. The city was destroyed in an earthquake and most traces to be seen in Aptera are from the roman empire 67BC – 324AD. In the ancient site of Aptera you can see roman cycterns and baths, a monastery and theater. The site lays beautifully in nature and is nicely restored. The site is beautifully set up and you walk through nature and history in between many flowers on a sunny day in Spring.

1966 the Turks, who occupied Crete, build a forteress to end the Cretan revolution against the Ottoman occupation. Info: Crete was always strategically important and has been occupied many times. It re-belongs to Greece since 1913.

There is a legend, that the muses and the sirenes fought in Aptera. The sirenes lost the battle and therefore lost their wings (Aptera = without wings) and had to go live in the sea.

Note: You have to pay a small entrance fee to the arceological site.